Keith Engelhardt Posted on October 16, 2020 Posted in Food For Thought, Fuel For Action Tagged with Democracy, democracy2020, Donald Trump, election, Election2020, Republican Party, trump
Why is this book not in the news???

The most successful Republican political operative of his generation, shares a searing, unflinching, and deeply personal exposé of how his party became what it is today.
For the past 50 years, Republicans have preached the same values: character, personal accountability, fiscal responsibility, and support for immigrants. But, author Stuart Stevens says it was all a lie.
It turns out, Stevens helped market these deceptions. He was a political consultant and worked on countless Republican campaigns, including four presidential races. But he says he was a fool and now accepts partial blame for the current Republican Party, which he believes has gone insane.
He sees Donald Trump as the logical conclusion of the past 50 years of Republican racism, anger, and self-delusion that are at the core of the party.
You’ll discover:
– that there’s a direct line of racist rhetoric between Ronald Reagan and Donald Trump;
– why Republicans so easily abandoned their commitment to diversity when Trump came on the scene; and
– how one decision in 1987 led to the rise of Fox News.
and more… 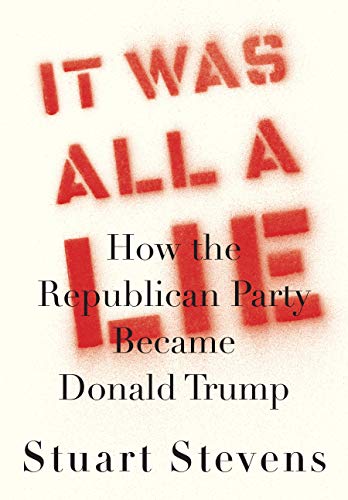